This website aims to provide useful legal information for those natural or legal persons who wish to enter into any kind of relationship with Ghana - focusing on some aspects related to international law and domestic commercial law. This site does not intend to describe in an exhaustive manner international law or domestic commercial law, but simply to focus on the most practical and interesting aspects for those natural or legal persons who wish to undertake business relations with the country. This website has no political content: it is free and open to all subjects who intend to contribute in the field of civil, commercial and administrative law. For any information, clarification, or suggestion, you can contact us at: mail@decapoa.com 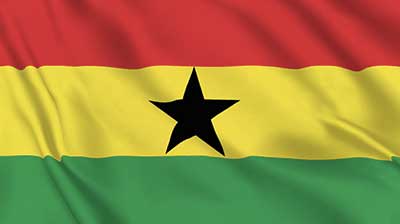 Compared to other Sub-Saharan African countries, Ghana (Republic of Ghana) has a decidedly more solid economy. The country, together with neighboring Nigeria and other West African states, is among the members of ECOWAS ("Economic Community of Western African States"), an African economic community that has introduced a customs union between member states, allowing in this way access to a wider market, in order to favor their investments and encourage their industrialization. Ghana remained under British domination until 1957, when it was among the first African states to gain its independence. Since the 1960s, the state has seen a succession and contention for power by different military regimes. However, in 1979 the Supreme Military Council was overthrown and from that moment a complex and much coveted process of democratization began, which culminated on April 28, 1992 with the approval, through a popular referendum, of the definitive text of the Constitution. Today the Ghanaian Republic has a presidential form of government, where the President together with a single-chamber parliament are elected, by universal suffrage, every 4 years. Ghana boasts a rather stable political situation and, at the same time, can be qualified as a moderate state. These circumstances, together with the policy aimed at the progressive economic and social development and the hoarding of foreign investments, entail a particular interest for the state in order to establish commercial relations. Indeed, Art. 36 of the national Constitution requires the State to "[...] take all necessary action to ensure that the national economy is administered in such a way as to achieve maximum economic development and ensure the well-being, freedom and happiness of every person and to involve an adequate standard of living, a suitable employment and to guarantee public assistance to the needy ". In fact, the statistics compiled by the Ibrahim Index of African Governance have shown how in the last decade the country has increased its growth and at the same time also political stability.

» DUE DILIGENCE ON GHANESE COMPANIES AND, IN GENERAL, ON NATURAL AND LEGAL PERSONS

» JUDICIAL PROCEEDINGS BEFORE THE GHANESE COURTS